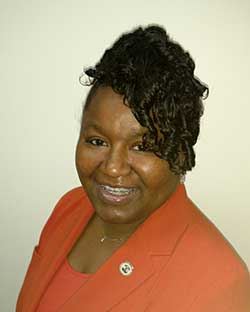 Kashari S. Jones, provides supervisory and oversight to a small team performing journey-level analytical solicitation functions in a centralized Contracts Unit, in the Chief Executive Office (CEO). Before joining the CEO, Kashari started her County career in 1990 at the Department of Public Social Services (DPSS) as an Eligibility Worker in General Relief programs, promoting in 1998 to a Family Support Office in the District Attorney’s Bureau of Family Operations, and three years later she moved to the Child Support Services Department (CSSD) upon its creation in 2001. Assuming increasing responsibility, Kashari joined CSSD’s centralized Contracts team in 2003 performing the full spectrum of Request for Proposal (RFP) solicitation functions. Kashari advanced to a Contract Program Auditor with the Department of Public Health (DPH), Office of AIDS Program and Policy (currently the Division of HIV and STD Programs), monitoring the HIV/AIDS Health Education and Risk Reduction program through faith-based, school-based, and multiple morbidity contracts serving one of the County’s most vulnerable populations. She transitioned to the Contract Development and Processing team returning to her roots in solicitations. Kashari returned to DPSS in 2012, joining its Contract Management Division, serving its administrative and solicitation sections. In November 2014, Kashari served the Risk Management Branch, Risk Management Operations as the Chief of the Contract Administration and Insurance Compliance Section developing and overseeing the development of RFP solicitations for the County’s insurance programs: Medical Malpractice, Broker Services for Insurance Programs, Workers’ Compensation Claims Third-Party Administration Services, and she procured through a competitive RFP process the largest Risk Management Information System in the State of California, and would argue the US. Kashari has an undergraduate degree in Public Administration, and two graduate degrees. She holds a Master of Public Administration and Master of Science in Marital and Family Therapy from California State University, Dominguez Hills. Kashari’ s been an LACMC member since eligible in 2012, and was voted to LACMC’s Executive Committee in 2017 to serve a three year term through 2020.